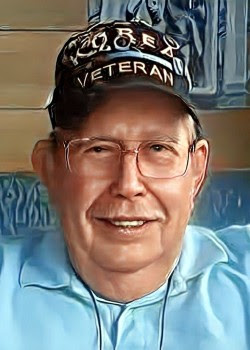 Guy Kenneth Penland, 91, passed away peacefully at his home on Tuesday, November 22, 2022, after a period of declining health. Guy was a native and life-time resident of Buncombe County. He was the son of the late Weldon and Ida Louise Penland. He was a member of Trinity United Methodist Church.

Mr. Penland was a veteran of the Korean War where he served as a truck driver and soldier for the United States Army. When Guy left the military with the rank of Private First Class, he pursued a new career. Mr. Penland’s experiences in the Army played a very important role throughout his life. He held the value of strength and self-discipline the Army taught him in high regard and encouraged all of us to invest in a cause larger than ourselves. In 2013 and 2016, Mr. Penland was recognized as the Patriot of the Year. At the age 66, Mr. Penland made the decision to go back to school at Asheville Buncombe Technical Community College and earned his high school diploma. He was a member of the Asheville Lions Club where he served as the district 31-A Vice District Governor from 1994-1995 and the District Governor from 1995-1996. In 2007, he received a lifetime membership to the North American Hunting Club.

Shortly after his time in the military, Mr. Penland served as an officer at the City of Asheville but later chose to pursue a career in diamond grading and evaluation. In 1977, Mr. Penland graduated from the Gemological Institute of America and took a position with the Jewelry Box where he worked for many years. In the early 90’s, he made the decision to step out on his own and opened Diamond Jewelry and Pawn where he worked until his retirement. Guy later returned to law enforcement for a short time after retirement and served as a volunteer deputy at the Buncombe County Sheriff’s Department.

Guy’s legacy to his family was the strength and courage as he faced his final days with dignity. “There are some who bring a light so great to the world that even after they have gone, the light remains.”

A service honoring the life of Guy Kenneth Penland will be held at 12:00 p.m. on Monday, November 28, 2022, at Groce Funeral Home on Patton Ave. Visitation for family and friends will be one hour prior to the service. Burial, with military honors, will then follow at Forest Lawn Memorial Park.